The US Healthcare Narrative: Democrats vs Republicans

A survey conducted by Pew Research Center in July-August 2020 showed that 68 percent of registered voters in the US considered healthcare to be “very important” for their vote, second only to the national economy (79 percent). Meanwhile, the government response to the COVID-19 pandemic came in fourth, with 62 percent of respondents saying that this would be very important when making their voting decision. 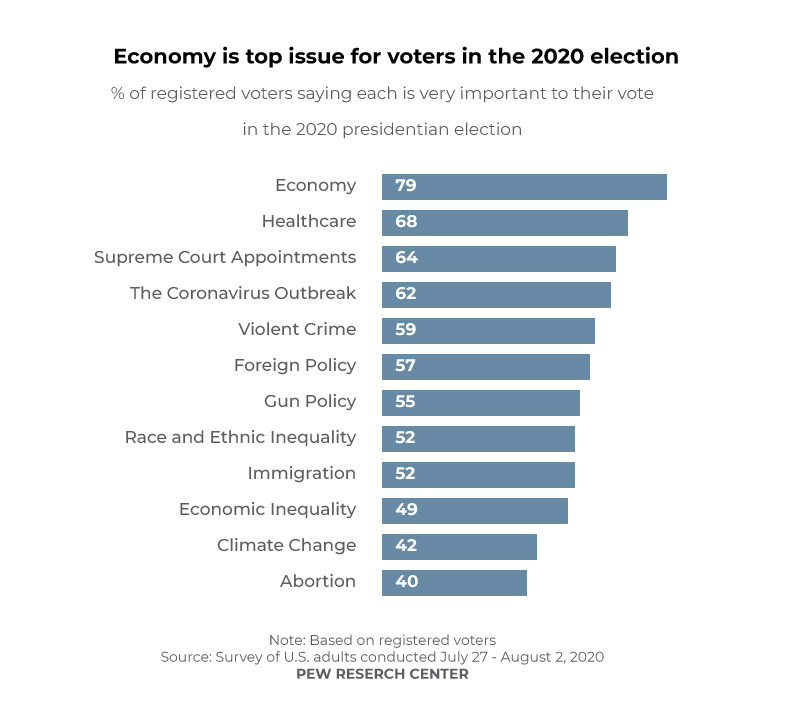 With the November 2020 US presidential elections just around the corner, it will be important to understand whether these sentiments are shared in the public communications of the two candidates: Donald Trump of the Republican party and Joe Biden of the Democratic party.

For this analysis, we created a corpora of the speeches from the Democratic National Convention (DNC) and the Republican National Convention (RNC). Datasets have been downloaded from Kaggle. We also used NodeXL Pro to gather the most recent 25,758 tweets that mentioned either Joe Biden or Donald Trump alongside “health care”. These corpora were compiled and processed using Sketch Engine for keywords, concordance, and parts of speech analysis. Then, they were individually run through Cowo to identify conceptual associations at the sentence level, i.e. pairs of concepts that most frequently appeared in the same sentence were identified and mapped out.

We utilized Gephi to calculate network centralities to help determine the most important concepts in the network, modularity class to cluster the concepts with the strongest associations with one another, with each cluster representing a sub-theme of the overall narrative network, and to visualize the networks using the Circle Pack algorithm. We used a similar approach in our previous article about the discussion on race among Twitter users.

“Health care” as a concept was not a top keyword in the RNC speeches. “Big pharma” has been the only health-related concept in the top 50 terms, according to typicality score (85.45, 10 mentions). “Frontline health care” ranked only 557th in typicality score (20.08, two mentions), and “federal health care” ranked 931st (17.62, two mentions).
“Health care” also only appeared six times in the speeches (with four of those instances being in Trump’s speeches), and the word “health” only appeared 22 times out of a corpus of 89,246 words (0.02%). 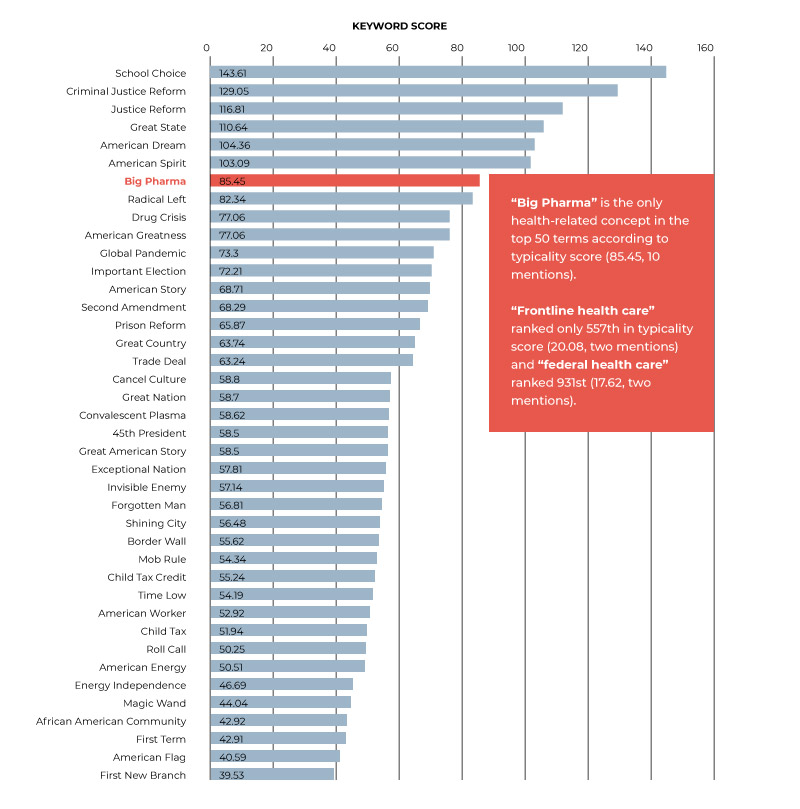 These are illustrative examples of how “health care” was used in the speeches:

Thus, we can see that health care was not given substantial play in the RNC. At all times, it was placed within the context of immigration and crime (including a “drug crisis”, which had a typicality score of 77.06 (eight mentions)).

“Big pharma” was mentioned ten times in the RNC speeches and was used to position Trump as an anti-establishment leader willing to take on entrenched moneyed interests. We can see this in both Trump’s speeches and the speech of his son.

The COVID-19 pandemic was described in the RNC as a means for the Democrats to defraud Americans by giving millionaires tax breaks through the COVID relief bill, and to steal the elections

“COVID-19” was mentioned 16 times in the speeches and “pandemic” was mentioned 48 times. These however were typically not used within the context of public health, but tax legislation, election reform, and the American war on drugs.

Convalescent plasma – which has not yet been cleared by the US FDA – was described as a “powerful therapeutic for COVID-19”, and was used to differentiate Trump from Biden’s position that “no miracle treatment was coming.”

Healthcare was also not a major topic in the DNC speeches

While the DNC speeches were much more compact than the RNC speeches, with a corpus of only 19,964 words, the same NLP techniques can nevertheless be used to surface the major themes in this collection of speeches. Interestingly, and in a similar fashion to the RNC speeches, the DNC did not give much attention to health care relative to other issues such as systemic racism (highest typicality score of 158.71) and the economy (104.11), with “maternal health care” (41.45), “public health crisis” (39.32), “home health care” (39.08), “health care system” (15.95), “health insurance” (8.28), “public health” (1.94), and “health care” (0.9) only being mentioned once in the set of speeches, for a total of only seven instances of the word “health”. 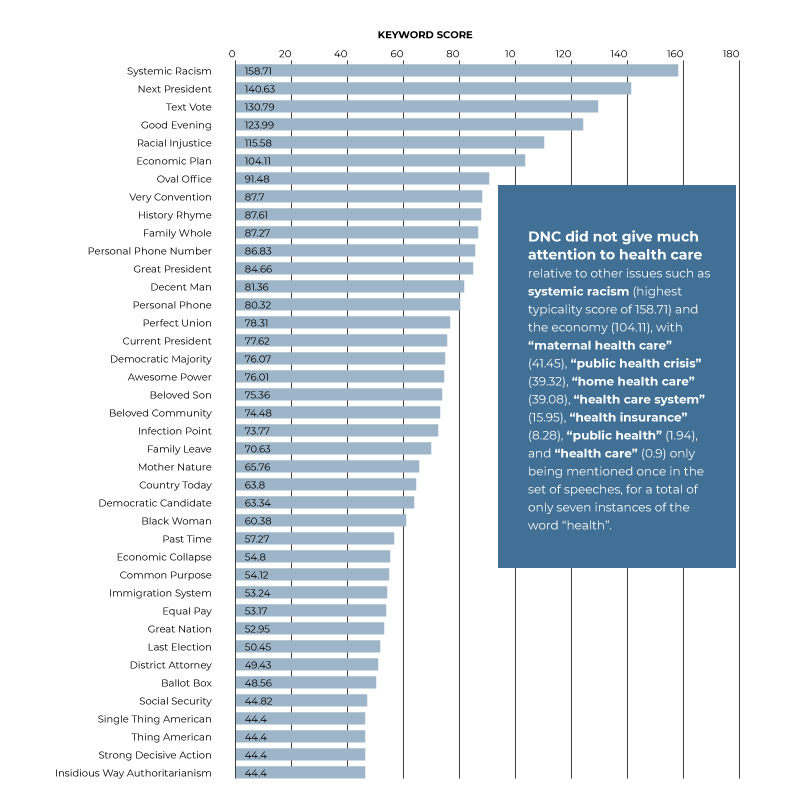 But even if mentions of health care were few and short, direct references to health systems and health insurance were made, and health care was placed within the context of a public health plan rather than to other issues like immigration or crime:

Here, we can see that while the DNC was not used as a platform to discuss details of Biden’s health plan, health care was at least directly addressed as an issue affecting the November 2020 elections instead of a mere launchpad for other priority areas (in Trump’s case, immigration and American exceptionalism).

Of the 25,758 most recent tweets mentioning Joe Biden or Donald Trump within the context of health care, 11,976 (46 percent) were retweets of the following message by the @JoeBiden account:
Meanwhile, there were 151 retweets (0.5 percent) of a tweet by the official @GOP account characterizing Joe Biden’s program as a “socialist takeover” of healthcare.

These observations are consistent with our analysis of the RNC and DNC speeches, where the former gave minimal attention to health care and consistently placed it within the context of non-public health agendas such as law and order, immigration, and election reform.
We also gathered the 24,067 most recent tweets mentioning only Biden and observed some frustration over health care even among would-be Biden supporters.

M2.0 Communications offers media analytics services including brand performance analysis, media monitoring, and social listening. As one of the top PR agencies in the Philippines, we make sure that our storytelling strategies adopt an evidence-based approach. Click here to see how our communications agency helped our partners achieve their PR objectives and business goals.
Send us a message today